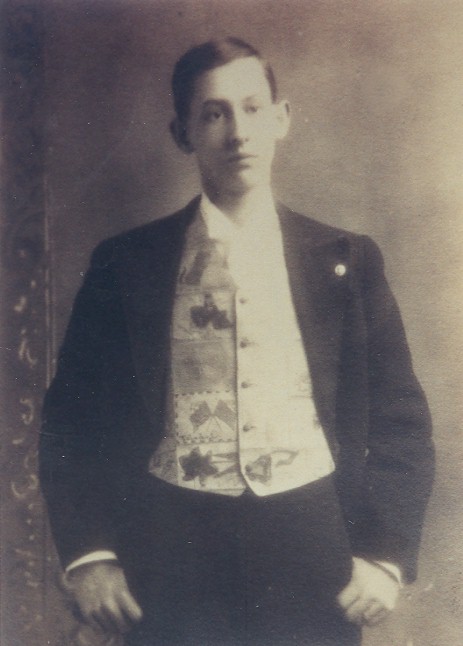 When AWTHS did the Arcanum video series last summer with Cary Wogoman he mentioned the Chancellor house at the corner of 1st and Locust when we were in the area.

In looking thru “The Arcanum Business book” we read several pages and places about the Chancellor’s and their involvement in various businesses and the community.

On page 181 of the business book we find the Chancellor Brothers quite involved with the photography business and were located at 6 West South Street or the old Saw Mill Lot in the triangle area where Pizza and Cream used to be and the post office now resides.

From 1905-1909 W. A. Chancellor was proprietor and from 1908-1909 they only offered outdoor photography, residences in postcard form.  Probably a lot of the old post card photos we find today.  From 1905-06 he was also involved in the insurance and real estate business.  In 1906 Mr. Chancellor also served as Clerk of Board of Public Affairs and often advertised he could be found at City Hall.

In 1911-1913 W. A. Chancellor moved his photography business to his home as it was known as the Chancellor Photo Gallery at the SW corner of First & Locust Streets.

The biggest thing the brothers were noted for was the Dreamland Theatre later known as the The Ritz.

William and Harry had the theatre starting in 1907-1909 at 108 W. George St.  In 1910-1927 it was known as the Dreamland Theatre.  (In the block where Tom Wetzel’s antiques is today)  The Dreamland, later known as the Ritz, was a part of the Arcanum and business community for many years.  Shortly before October 1909 the two unmarried brothers and their mother, Amanda, decided to sell their possessions and move to Florida.  In 1910 they returned to Arcanum as they did not like Florida.

In 1927 the Dreamland closed their doors for renovations and reopened from May 1927 thru July 1953 as the Ritz Theatre.  In 1930 the newspaper announced sound had arrived ending the silent movies.  Two big shows at the Ritz were “Gone with the Wind” and “Wizard of Oz”.

William passed away at his home March 29, 1953, unmarried.  Harry had married late in life and continued to run the theatre but didn’t quite obtain 50 years in the community.  The notice read in 1953 after 46 years they regretted but were closing.

The Chancellor’s were strong supporters of the community helping with the buying of fire equipment for the Arcanum Fire Company along with free movies for the kids at Christmas.  They participated in Arcanum’s 1950 celebration by cataloging and showing their collection of community photos which numbered over a thousand!  Many postcard photos you see today may have been part of the collection of Arcanum and area.

The AWTHS has a collection of glass slides of various businesses and individuals in town that were donated by Joan Rench.  According to her daughter, Bev Rench, we were told the slides were bought from Roland Gilbert.  We do not know how or when Rolland obtained them.  If anyone has info about the glass slides, year, what or how they were used please contact AWTHS.  We are wondering if possibly these were from the Chancellor Brother’s collection of photos and photography business or the movie theatre.

We find the Chancellor family, father, mother and two sons buried at Abbottsville Cemetery along with Harry’s spouse.  We find the parents’ names were Richard and Mary Amanda Smith.

Harry’s wife was Bertha May Cason.

Here is a link from Find a Grave about the burial of the Chancellor’s and additional info.  I’m sure there is advertisements and such in the old Arcanum Times Newspapers at AWTHS as well.  https://www.findagrave.com/memorial/100866717/william-albert-chancellor

Please read and follow AWTHS copyright guidelines for this blog, story and photos. Thank you.