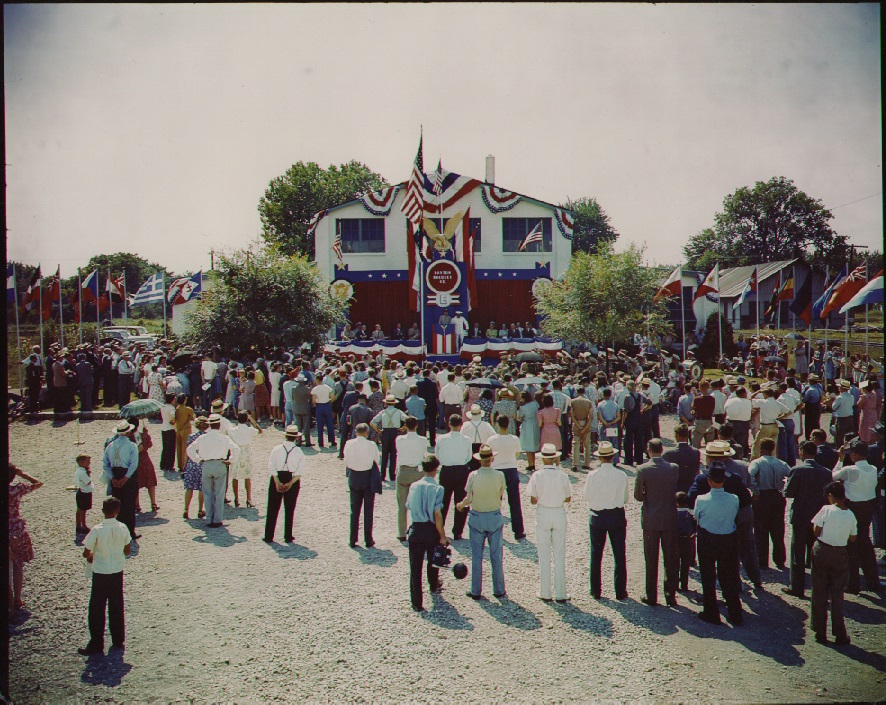 Award for WWII production at Racquet Factory on Albright

Written by Barb Deis. Taken from the AWTHS Newsletter, 2006 Qrt. 4. Continuation of the Racquet Factory story.

Dayton Racquet Company, Inc.
The Story Continues
The story of the Dayton Racquet Company WWll defense work was shared with readers in the
July AWTHS newsletter. lt told of an Army-Navy E Award pennant presented to the company for
excellent work during the years they made bolts for carbine rifles.

It was at the company auction, after it closed, that Elizabeth Stephens bought the pennant and
an American flag. ‘The bidding for the flag and pennant was slow”, recalled Liz, “l don’t recall
what I paid for the flags, but I really wanted them to stay in Arcanum”. Liz donated the flag and
pennant to the historical society after reading the story in our newsletter. The points of the pennant
were tattered, but were easily mended by AWTHS seamstress, Joan Rench. The flag and pennant
will be well taken care of in their new home. And, most important, they will help tell of an important
time in Arcanum’s history, and the history of our country.

Betty Murphy and Jean Hangen worked at the Racquet Company during the war effort. They
were joined recently:by Etlen I’langnn, Pauline Allen, Phyllis Bunger and Marjorie Meyer for a
photo with the Army-Navy pennant. They all worked at the company over the years. Pauline
said she could still hear the machines running and feel how sore her fingers were from working on
the racquets. Many agreed with her. Marj Meyers has her time card from the last day the company
was in operation. She worked there for 35 years, Phyllis worked for the Mundays 25 years. A scrapbook kept from the early days of the business was given to the historical society by Tom Staley, who purchased it at the auction. The scrapbook holds advertisements, price lists, articles from trade publications and pictures of stars and champions who used the steel racquets. Loretta Young, screen star and Fred Perry, tennis champion are shown playing badminton at Palm Springs, Calif. Tom also gave a display holder
with 5 racquets. Other racquets were given by Larry Fourman, Phyllis Bunger and Ellen Hangen.
Ted Munday gave another display holder. Phyllis also donated a Racquet Company auction bill and
1989 price list.

Marion (Shony) Falknor, brother to Jean Hangen, recalls working for Louis Munday right
out of high school, first repairing rackets then later with the war production. “l went to work on
the second shift, coming into the plant one evening with a load of repaired rackets”, recalls
Shorty, “l was confronted by a young lady (Frances), who later became my wife, that sent my rackets
spilling all over the floor.”

Arcanum was a prosperous village of 1,150 in I 934. Wanting to continue growth of the community and offer employment to the local people, a committee formed to solicit funds to aid in moving the factory from Dayton, and also to help defray costs of fixing up the building at 302 S.
Albright St. Built in 1920 by the Quick Change Chuck Company, it was later used by Arcanum
Livestock Exchange. Over 200 residents and businesses gave $1,500 to bring the ” Racquet
Factory” to Arcanum. Although damaged by fire March I 7, 1980 the company continued operation
until 1995.
Richard (Dick) B. Munday acquired the Dayton Racquet Company from the Talbott family in 1931.
Founded as a Talbott enterprise in 1920, the factory was located in the old Dayton Friction Toy Co.
building on Hawthorne St.
Photo:
Left to right:Tom and Liz Stephen, Ellen (Baker)
Hangen, Pauline (McClanahan) Allen, Betty Murphy,
Jean Hangen, Phyllis (Bolinger) Bunger and Marjorie
Meyer.

Join us September 8, 2022 for the program about the factory at 7pm. If you can’t attend or missed the event, check out the video on AWTHS FB page to watch. Most AWTHS programs are video-taped and available thru our FB page and AWTHS library.