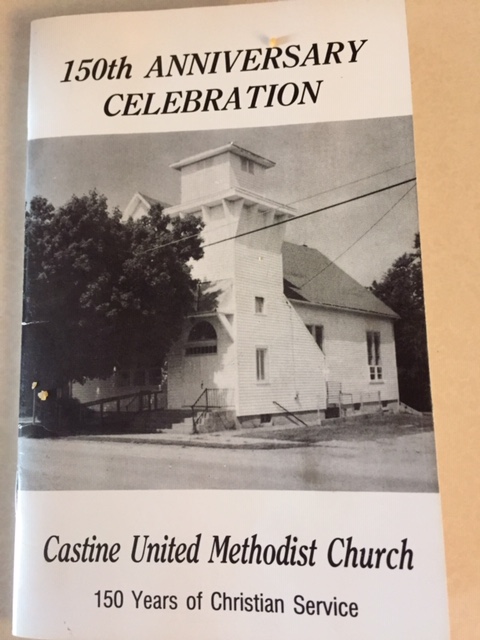 Earlier the first preaching in the vicinity was at the home of Samuel Coblentz in the area of Otterbein Chapel.  In 1840 a rough log church was constructed.

According to the Otterbein Chapel United Brethren Church, it was a part of the Greenville Circuit.  Also Castine.  The first United Brethren Church in Castine was built in 1847-1849.  Prior the members met at George Byers barn, one mile south and east of Castine and also Samuel Coblentz’s barn.  The second meeting place was a small frame church located south of Rt. 722 going west out of town.  This church was comfortably seated, lighted with tallow candles which hung on the walls.  In the center suspended from the ceiling were two kerosene lamps raised and lowered with a rope.  Later the church was lighted with kerosene lights.  A large box stove in the center gave warmth.  The song books used were without notes, long and short meter being used.  Later song books with notes requiring musical instruments.  The pulpit was handmade by Benjamin Good.

The new church was located on the ground donated by George Hartzell who ran a saw mill.  It was constructed during the latter part of 1892 and early part of 1893.

The Circuit constantly changed.  The Greenville Circuit was divided and the pleasant Hill Circuit came into existence with Castine a part.  Others consisted of Otterbein, Pleasant Hill, Hagerstown, Castine, Fourtses, Madison (New)?, and Smith’s.

In 1893 the Castine Church was a member of the Mt. Zion Circuit.

Next year it was composed of Castine, Savona, Abbottsville and Caylor Chapel.

1898:  Castine was put on the Ithaca Circuit with Baltimore (Verona) and Arlington.

In 1947 the church celebrated their 100th anniversary.

Otterbein Church closed 1992  leaving Savona and Castine yoked until 1994.  In 1997 Castine became a part of the ACE-Abbottsville, Castine and Eldorado with two pastors.  In 1997 Castine United Methodist Church celebrated its 150th year.

Today is the Church of the Living God.