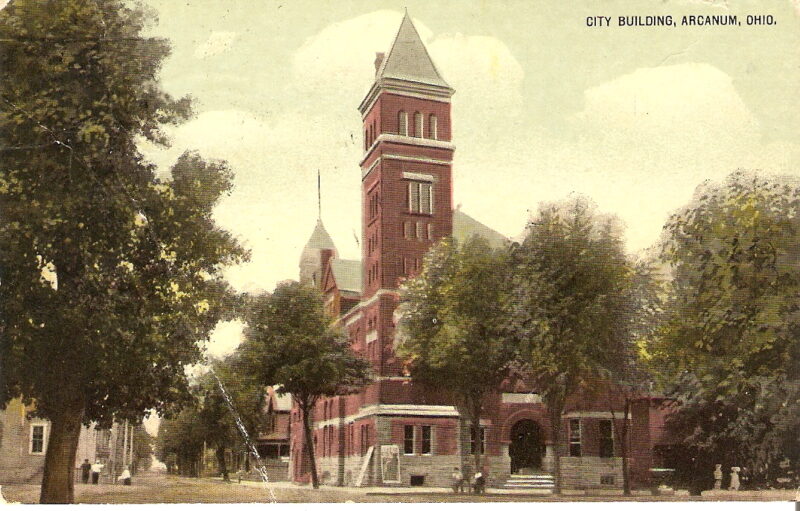 The Opera House located on the second floor of the City Building at 102-104 West South in Arcanum could well be called a center of the community social activity. It was leased on a yearly basis with the manager providing entertainment such as minstrels, stage shows, comic opera productions, etc.

The first moving pictures shown in Arcanum were shown here in 1899. The Opera House was also the
scene of numerous Farmers Institutes and was used for high school graduations before the new school was erected in 1924. It was also the scene of lectures, Temperance meetings during prohibition and Ciphering matches. A Republican Rally was held there in 1922 and in 1916 one
could go to the Opera House to hear the election returns—free! This last event began at 10 p.m. on Tuesday evening with entertainment by the “band boys” afterwards. When the new school building was erected, the social events at the Opera House began to diminish with the auditorium.
The Opera House served the community from 1891 until 1930.

We read in the “Arcanum Chronicles” by William Gunder and Anita Short that the first floor was a combined City or Town Hall and Township House. Offices to conduct village business were constructed as well as the police department and fire department.

Architects were Williams Otter and Dexter who were paid in 1888 for contract work. The construction of the building was awarded to Daff Vashti Zimmerman. The interior contractor was James Mellinger.

Now the good news. This building will be open for “Ohio’s Open Doors” Saturday, September 19 with guided small group tours from 9am-noon. The event is sponsored by the Arcanum Preservation Society in co-junction with Ohio History Connection.

Please see AWTHS copyrights to this blog and content.