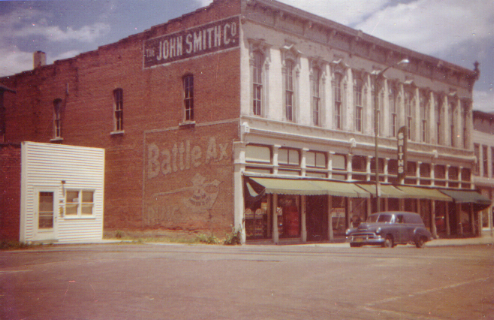 Info from the Arcanum Chronicles Vol. 2 for sale for $18, Arcanum Public Library and Historic Ivester House by William Gunder.

The first Library location was in a room over Smith’s Store rented for $4 per month.  The Arcanum Public Library opened on January 25, 1911 with a collection of 450 volumes plus a number of periodicals.

The Library was moved during the week of November 5, 1915 to this new location at 3 West George Street.  A former Arcanum resident, Professor Ed Rynearson of Pittsburgh, PA, donated 106 volumes to the Arcanum Public Library in January 1916. Formerly the area of Arcanum Federal Savings and Loan .

The Library moved in April 1926 to the two east rooms the ground floor of the old Arcanum High School owned by the Knights of Pythias Lodge.  This would have been East South St.

The Library had continued to grow and on March 9, 1944 the Board signed a ten-year lease to use the second floor of the old Weisenbarger storeroom on West George.  Extensive remodeling and decorating was required before the new location downtown could be used.  Books and equipment were moved in April 1944 and the Library formally opened for business Saturday evening July 8, 1944.

Thousands of rare and valuable objects representing nearly the entire historical and archeological collection of the Greenville Historical Society located in the Greenville Library were moved to the Arcanum Public Library for public display in May 1946.  Expansion of the Greenville Library required that the collection be moved.  Included were collections of the Annie Oakley possessions, Treaty of Greenville and other papers, the Zachary Landsdowne collection, relics from the Fort Jefferson excavations, etc.  The historic society was planning to enlarge its scope to cover the entire county and local people promoted the sale of memberships in the Arcanum area.  The museum was located here for about a year while new quarters were located in Greenville.

The groups of relics and antiques of the county’s pioneer era were moved back to Greenville to the old Garst home in May 1947.  This became their permanent location and the Society became the Darke County Historical Society.

In July 1950 an Arcanum Centennial Scrapbook was composed containing newspaper clippings, pictures and other features for presentation to the Library.  This part of the community’s history was destroyed in 1959 together with the Library.

After many emergency meetings and hours of discussion and planning, the Arcanum Public Library leased the first floor of 4 N. Main Street from owner Richard Kincaid as a new temporary location.  It would be another five years until a permanent home for the Library could be found.

Books were moved to the newly renovated Ivester House during the third week of August 1964.  The opening date was scheduled for September 8, 1964 with open house and dedication ceremonies held on October 11, 1964.

During the early 1990s, another massive expansion was planned.  It would roughly double the size of the library space by adding about 4250 sq. ft. in a new West Wing Addition and Renovation.

This large addition was dedicated on Sunday, September 10, 1995 on the front lawn of the Library.  The dedication speaker was Dr. Richard F. Rosser, an Arcanum native.  An open house from 3 – 5 P.M. followed the dedication ceremony.  The Board of Trustees were: Phil Garbig, President; Michael Kreitzer, Vice President; JoKay Miltenberger, Secretary; and Board Members Betty Cox, David Hill, Rose Kayler, and Carolyn Siculan.

Above info from William Gunder book and AWTHS files.

Additional details about the Ivester House and the Arcanum Public Library available from AWTHS.

Please see copyright details on AWTHS website about our blogs.