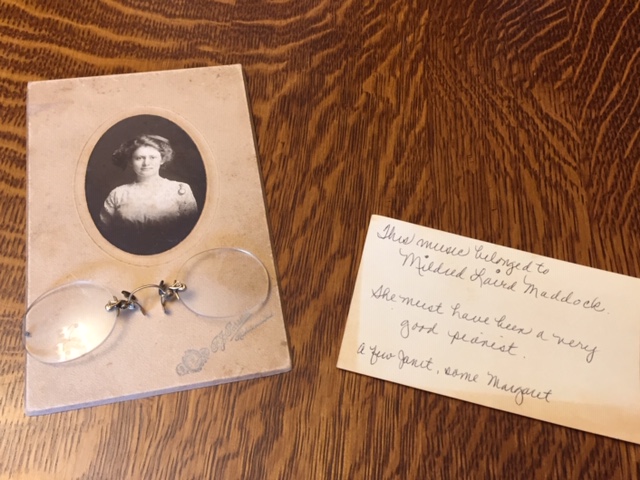 This blog is dedicated to Mildred Laird Maddock, grandmother of Janet Brown Rhoades.  This is Janet’s story written about her grandmother, Mildred, who died during the flu in 1918.

Her beautiful sheet music and memorabilia was to be on display upstairs at the Arcanum Public Library during the month of May by the Arcanum Preservation Society.  At this time the public library is closed so the display is pending due to the current situation.

Andrew Laird’s father, James Laird, was 9 years old when his father Glover brought his wife and 4 children to America from Ireland.  They left during the Irish potato famine, I believe around 1840.  Andrew Laird, married Sadie Brown in 1890.  Born and raised in Preble County, OH, they moved to Van Wert, Ohio, where Andrew got a job as a school teacher.  On May 8, 1894, Sadie gave birth to Mildred Elizabeth Laird.  Sadie died in 1896 when Mildred was about 1 yr, 15 months old.

Andrew brought baby Mildred back to Preble County, Oh, to live with Sadie’s parents, Eli & Phoebe Brown, who lived at New Westville, OH (near Richmond, IN).

Memories from Mildred’s daughter, Margaret Brown Cullers:  “Mildred spent most of her growing up years with her grandparents.  She graduated from Jackson High School, Campbellstown, OH, with the Class of 1913.”

On January 28, 1915, she married Earl C. Maddock.  They lived on a farm west of Camden, OH.  I was born July 9, 1917.  They say it was in day time & my Dad and Uncle Fred always said Uncle Fred saw me before Dad because he came to the house for a drink first and saw the new baby.  I was named Margaret after my Aunt,  Florence Margaret Laird, my mother’s half sister.

I can’t remember a thing about my mother (Mildred).  She got the flu in 1918 and was pregnant and died in October 1918. (History states that almost all women pregnant during the 1918 flu epidemic did not survive.)   She was 24 years old.   I was about 15 months old.  They said I cried uncontrollably all day the day she died.  I’ve often wished I could remember something about her.”

Mildred is buried at the Fairmont Cemetery, Camden, OH.  My mother never failed to decorate her grave every Decoration Day, and to this day, I continue to do so.  The rest of the Laird’s are buried at New Paris and I decorate their graves as well.

Mildred was quite the pianist, I know this by looking at the sheet music she played.  My mother grew up taking piano lessons and learning to play her piano, as well as me and my sister.  After mother moved from the farm on Karr Rd, she gave the piano to me.  I kept the piano in my living room until my daughter, Lori Usserman, married and had her own home and agreed to keep it.  At that time I had the piano completely restored and tuned.  She, in turn, kept it in her living room until her daughter, Lindsey Stout,  married and had a home of her own, and now that same piano resides in her home in Beavercreek, OH. On top of the piano is a picture of our Grandmother, Mildred Laird Maddock.

I have a large container of sheet music that belonged to Mildred along with her Bible, purse, glasses, photo and memorabilia.

I asked Janet about her story and Mildred’s life and yes, Sadie (Mildred’s mother) died young with Mildred around 15 months old as well as Mildred dying young with Margaret at 15 months also.

From https://ohiohistorycentral.org/w/Influenza_Epidemic_of_1918 A we read:  deadly outbreak of Spanish Influenza, which reached epidemic proportions, spread from Europe to the United States and to Ohio in 1918. Approximately 500,000 of those with the disease died from the virus in the United States. The epidemic seemed to be particularly bad in army camps, where the men lived in close proximity to each other. Within only two months, more than 300,000 soldiers had contracted the illness. Approximately twenty thousand troops died of influenza.

Communities across Ohio experienced illnesses and deaths from the influenza at this time. During the last week of October 1918, 1,500 Ohioans died. Between October 1918 and January 1919, almost six hundred Dayton residents perished. In an attempt to stop the spread of the disease, many colleges temporarily closed their doors. In some cases, campus buildings were made into makeshift hospitals to treat those who had contracted the illness. Many other parts of the country also experienced tragedy as a result of the influenza epidemic of 1918.