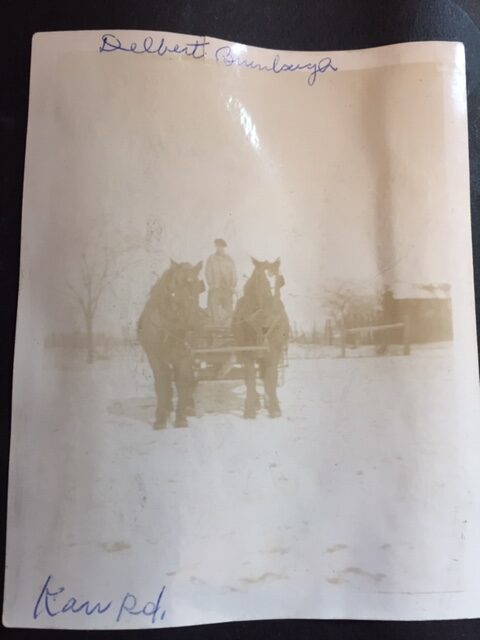 As told by my parents and grandparents: Inez Brumbaugh and Dale and Betty Sease.

Farming and country life was much different back in the day. At first the land was cleared by settlers and our early ancestors. Life was consumed by simply surviving and being self sufficient as far as raising crops and animals for food as well as materials for clothing, crude furniture for the cabin and items needed to carve out a living. Later as family’s and farms began to prosper did farmers take on more acreage and as the means to farm changed with the equipment needs as tractors began to replaces horses and mules for working the fields. Also by that time, there was more crops to sell, stores were supplying more items, and factories had stepped up production methods. But prior to that most corn and wheat was used to feed the farm animals. Horses were used to till the ground and hay was raised to feed them. Hogs, where we get our hams and pork chops, were used for meat and the lard or fat off them for pies and baking.  And crackling’s!

In earlier times families used the lard for making soap and candles. There was dairy cows for milk, butter, and cream; chickens for eggs and eating. My grandparents sold their extra eggs in town, Pitsburg and Arcanum. Beef cattle were raised for their meat, like hamburgers, roasts, and steaks. Beef cattle wasn’t around until later like the 1950’s in our area.  Most of what was raised was used for the family and it wasn’t until the early 1900’s or a little later that the extra grain was sold to the local grain elevator. I would suppose as tractors replaced horses and as more acres were farmed that the extra was then available to sell.

According to my mom, the threshing machine would make its rounds in the farming community threshing the wheat.  Neighbors would help each other.  The farm wife’s would fix the huge meals consisting of ham or chicken, wilted lettuce from the garden, mashed potatoes and gravy, pickles, noodles, pie and whatever was available fresh from the garden.  The grand meal was served in the dining room on the good table with china.  The men ate first and the women and children last.

Besides the house work, laundry and meals many women helped out on the farm with the animals especially with milking and gathering eggs or feeding the chickens.  The man would come around with his milk truck and lift the heavy cans and put the milk cans in the back of the truck.  The cats would wait around for milking time to get some of the fresh milk to drink.

Our family raised the jersey cows which were known for their rich cream.  My mom said since we had our own milk we didn’t get off the dairy man and it wasn’t delivered in the glass milk cans.

They sounded huge!  There was the truck garden with rows and rows of potatoes, melons, cucumbers, tomatoes, and strawberries.  There was also lettuce, radishes, onions, carrots and red beets along with peas and green beans and cabbage for kraut making as well as boiled cabbage. And sweet potatoes.  Had to watch them-the mice liked to get in them too.

In the orchard was the fruit trees mainly apple trees for sauce, baking and eating.  We must have had pears because Mom talked about them being kept upstairs in the “cold room”.  There was also grapes for jelly and grape pie.

The horse radish pile was behind the wash house.  Good to grate and serve with pork, one of the staples.  My family also hunted rabbit and squirrel and Grandma Brumbaugh and the Sease’s liked their fish!

We will continue our story in the next blog! Please consider writing your family stories and memories. And please share with us.