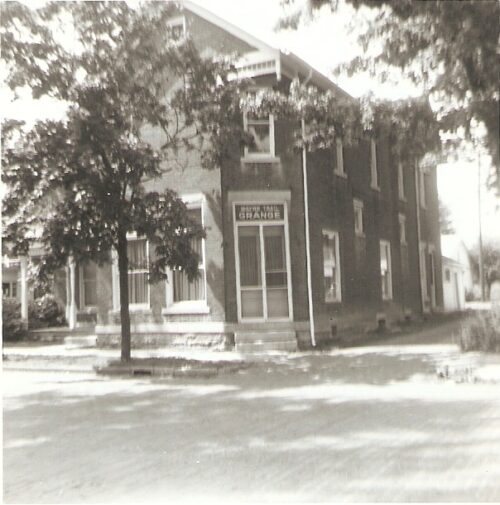 This historical building at 123 W. George Street was originally the Wayne Trail Grange and presently is the home today of the Arcanum Wayne Trail Historical Society.

As you read the accounting of the Grange history you will see the rich history of this building.

1-10-1963 – Grange Busy Historical Property in Arcanum. Remodeling Plans in Progress. The Arcanum Hotel, a famous landmark here will continue its career as a Grange Hall. Friday, Jan. 4, 1963 members representing Wayne Trail Grange No. 2647 of Arcanum, Dwight Miltenberger, Master; Joe Albrecht, treasurer; Jesse Fourman, trustee chairman; Roland Byers, trustee and Robert Wyan representing Clatus Dull, trustee met with J. Robert Beck in the office of attorney Herbert Cox to complete the transaction of buying the brick structure at 123 w. Geore street. Leonard Norris, realtor handled the sale of the property. The Grange which now meets in a building a block away, plans to remove partitions and open the central wall to provide a large meeting hall. A wood attached garage at the rear will be removed to help provide more off-street parking for grangers. \”My mother, Mrs. Olive Beck purchased this building June 23, 1923 from the Shantz Brewery Company of Dayton,” recalled Beck.

Built for a saloon, “when we moved here there was a piano store in the building. Originally, a school house was on the ground. :The present two-story building was built for a saloon in the late ’80’s or early ’90’s. It was followed by a pop factory, implement place and picture show. “Then mother made alterations and converted the building into a hotel. It contains 15 rooms. “I later made one side into an apartment. Even after it ceased to be a hotel, rooms were rented. Some Noted Persons. He recalled “When it was a hotel some noted persons stayed here including William Jennings Bryan, “Billy” Sunday and former Ohio Governor Myers Y. Cooper, u.s. Senator Atlee Pomerene,

Al Sweet formerly with John Philip Sousa’s band and a frenchman who set a high altitude record in an early airplane. First Brick Paving. He recalled his mother’s home cooking served home style on a long table to Hotel patrons. “She got a quarter for a breakfast of ham and eggs and a little trimmings. “I remember sitting on those front stone steps as a boy and watching workers laying the first brick paving on the street. Beck said his father, Edward Beck, a musician from California had a harness shop here for years. He began working for a harness maker and eventually acquired the shop. “Dad met and married my mother, a local farmer’s daughter.

All Beck’s relatives were in show business. He himself

was on the road with Al Sweet’s Chicago Cadets Band. He now is in the advertising business with mechanical window displays.’-.founding of Wayne Trail. On Sept. 14, 1936 a meeting held at West Point school house for the purpose of forming a grange. It was moved by Ora Fellers and seconded by A.R. Katzenberger to form the Arcanum Grange. Fred Etzler was the first Master with Bernice Wyan, secretary and Lillus Holmes, Lecture. There were 48 charter members and the Wayne Trail Grange was chosen as its name and it was given charter No. 2647. In 1~37 still meeting at West Point school, but soon after moved to second floor of old school building presently Bailey Motors. Then the Grange moved to the Jr.O.U.A.M. Hall where they are presently. They made money to buy building by serving dinners at various public sales, banquets, selling cook books and dish cloths. The grange now has 124 members. They meet the 1st and 3rd Thursday.

Does anyone have any photos of the Beck Hotel or the Beck family? Or any photos of past businesses at this location including the Louise Deitrich Saloon?

The AWTHS has a few pieces of the original Grange artifacts. For a complete listing of all the businesses at this location please see The Arcanum Business book by Anita Short. It may be purchased from AWTHS or thru our website under publications.

Please note AWTHS copyright notice on this and all blog articles.