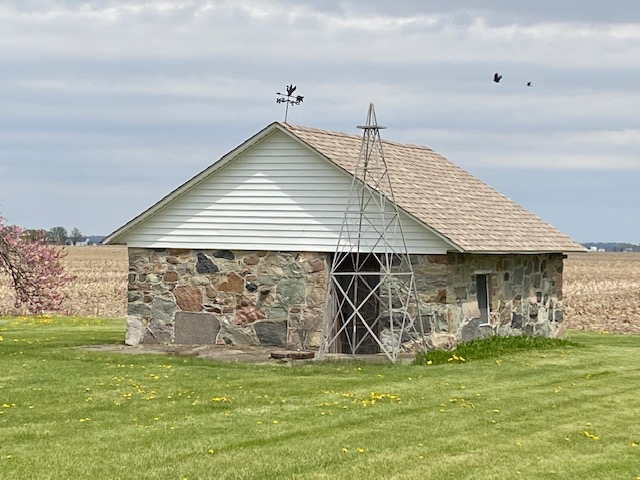 Pump shed Twin Twp. which had troughs for cool water to keep food products. A windmill sat on this property at one time.

We are continuing our blog series after writing last time about summer kitchens, smoke houses and root cellars.

We copy from Wikipedia about springhouses: A spring house, or springhouse, is a small building, usually of a single room, constructed over a spring. While the original purpose of a springhouse was to keep the spring water clean by excluding fallen leaves, animals, etc., the enclosing structure was also used for refrigeration before the advent of ice delivery and, later, electric refrigeration. The water of the spring maintains a constant cool temperature inside the spring house throughout the year. Food that would otherwise spoil, such as meat, fruit, or dairy products, could be kept there, safe from animal depredations as well. Springhouses thus often also served as pumphouses, milkhouses, and root cellars.

I’ve seen two such spring houses, fairly large ones at that. First is Miami County, The Johnson Farm. You may have visited this site as well. Second was in Montgomery County, the old Rasor farm. Here is a link to view the Johnson Farm Spring House. https://ohiomemory.org/digital/collection/p267401coll32/id/28083/

Here’s a good description from this source: https://acornabbey.com/blog/?p=316

The pump house is a small building to house (and keep from freezing) the parts of the water system that aren’t in the well. That includes the pressure tank and the pressure control switch. It’s a necessary part of the water system. I wonder if this is where the windmill came in? Helped to pump the water? Windmills used to dot the countryside and it seems would have been a valuable tool to get water. We read about them on the great plains where water and wells were limited and benefitting farmers for their livestock and crops and the railroads or places that needed extensive amounts of water for steam engines. They would have been a valuable addition especially before days of electricity by using wind power. Perhaps motors even driven by gas or other fuels. What’s your thoughts on the subject?

A wellhouse was a common outbuilding in the days before electricity. The well itself, with a windlass and bucket for drawing water, generally was near the wellhouse door. Inside were water troughs in which the milk jars were stored and into which cool water was poured a couple of times a day to keep the milk cool.

So basically it was used as part of the well system to obtain water and the building would have been like a “walk in” refrigerator to keep foods cool.

On our homeplace we had a building called a “wash house”. It was a wooden structure with chimmey, cement floor, windows, and a back room where hams hung. I believe it was a smoke house but wasn’t referred to as such by my grandparents or parents.

My grandparents used it as a Laundry room. Years ago the washing machine was gas powered. So I assume noisy and smelly. With the chimney they could heat water in the building and run the washing machine. The well was next door for water. And the clothes line was right outside the door!

As electric came to the farm in the 1930’s it was probably replaced eventually with the wringer washing machine and moved to the cellar where hot water would be available as well as electricity to plug the washer into.

In this photo I’m not sure if this was the gas powered machine? We had another electric wringer machine but I do not have a photo of it.

Please share your photos of your out buildings and their uses and stories. Our readers love to see photos and hear the stories!

Please follow AWTHS guidelines for this blog. All links and photos need to be credited to the source.