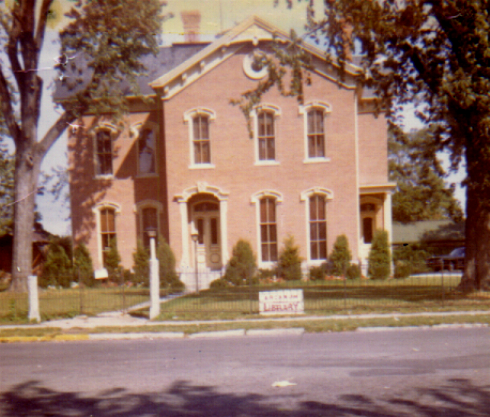 Taken from the Arcanum Chronicles Vol. 2 by William Gunder as well as various notes in the AWTHS library files including interviews and articles by Marj and the “Third And Main” articles.

Dayton Journal Herald columnist, Marj Heyduck, wrote extensively in her daily “Third And Main” column about the Library’s destruction from the 1959 fire.  She lived in Wayne Lakes and always stopped each morning in Arcanum for coffee at a local restaurant.

Books were moved to the newly renovated Ivester House during the third week of August 1964.  The opening date was scheduled for September 8, 1964 with open house and dedication ceremonies held on October 11, 1964.

Marj Heyduck was the dedication speaker and she wrote a moving story in her ‘Third And Main’ Journal Herald column describing the event.  The author quotes from her writing:

“Many persons in the whole Miami Valley have a share in this small, neat library because they came forward to offer books from their own shelves when the rebuilding began even before the fire rubble had been cleared.”

“These past years, I’ve sat through or taken part in many a dedicatory program, so I have a basis for comparison.  The brief, well-planned, punctual program, attended by people who wanted to come instead of those forced to appear because ‘it’s the thing to do,’ was one of the best programs of its kind I’ve ever encountered.  The natural beauty of the fall day, the brilliance of the October sunshine, the friendliness apparent on all sides set this program apart as a bright many-faceted gem of living beauty.

“I had the feeling, as I stood on the grassy lawn outside the lovely old-fashioned residence which shelters treasures of the world within its red brick walls for all to share, that this was a moment of genuine Americana, wholesome and true.

“I felt it in the joyous voices of the Arcanum High School Chorus . . .  in the measured steps of the uniformed Veterans of Foreign Wars and in the pride with which their gift of an American flag was quietly presented and accepted . . . in the prayers of gratitude and the words of plain, warm praise acknowledging help from many sources.

“There was a special quality about this lovely autumn afternoon in a small town in the country, where friends came together in the sunshine on a green lawn under big old trees to dedicate a home for a little library.

“It was a moment in time – clear and clean-cut and luminous – with a quality as lasting as the wonders to be found within the covers of the books themselves.”

I love this dedication writing.  Even though written 1964 I feel like it is today describing a small town’s beautiful gem for all to enjoy.  Not just another historic building but what it represents:  people helping others by donating books.  Taking part in a dedication on a beautiful fall day.  Preserving a building for the future for community use.  And when you step inside-a look back thru the ages but books and services for today’s world.

Marj was a woman back in the 1960’s who had a vision for women and a community of the future.  At the Wayne Trail Historical Society we have a case with some of her hats on display as well as her books from her writing days for the newspaper in Dayton.  The items were donated from the Arcanum Public Library where Marj was one of the contributors to help get book donations.  Other items are at the Garst Musuem in Greenville.

There are many great stories of Marj Heyduck around Arcanum.  From the guys washing her pink Cadillac at Troutwines, to the rounds at the Main Street Restaurant, to the bus ride to Dayton with Marj.  Can you imagine those conversations on the bus?  And her many hats!

Please see AWTHS copyright regarding this blog and all articles.