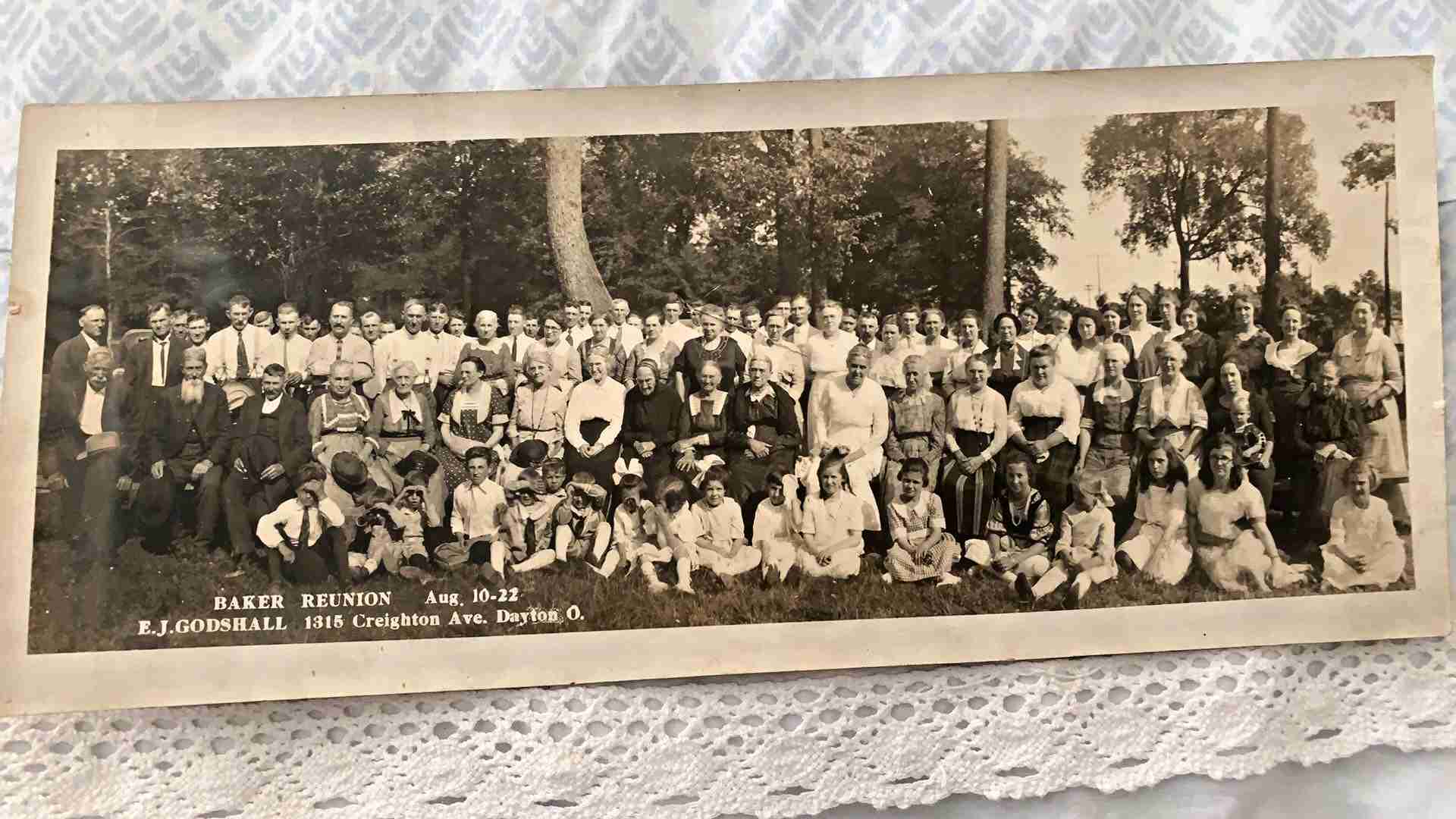 Picture is of the Baker Reunion Possibly 1922.

Summers and family reunions seem to go hand-in-hand. Many would post their upcoming reunion in the local newspapers. With social media, I’ve seen a few posted on Facebook. It seems emails and texting have replaced written invitations and phone conversations. But however the message and date is announced, the reunion is about bringing the family together again for another year in an afternoon.

This was the case with the Baker family of Monroe and Van Buren Township in Darke County. Samuel Baker hosted over 100 people in his barn back the long lane along Pitsburg-Laura Road. Last year this “reunion barn” photo scene from long ago was taken down. It seems the reunion was also held in Brookville, as the Baker’s originally settled there in the area before moving up into Darke County early 1800’s.

In talking with a distant relative of the Hofacker family, Rae Ann Pyles Smith, shared this reunion photo from the Hofacker Reunion. This picture is from the 1990’s in West Manchester. Can you help identify anyone? You might be related and not know it goes back to the Hofacker’s, Martin and Leah (Fourman) Hofacker who lived on the corner of Gordan Landis and Rt. 49 back the long lane. Martin came to Darke County around 1850’s and they had the following children: Henry, George, William, John, Samuel, Maggie, Katie, Lydie, Emma and Noah. From the Hofacker women marrying we pick up the Troutwine, Mehaffie, and Michael names.

The Hofacker family or at least this photo came from William (often referred to as Willie) and Amanda. They alone had at least 8 children: Bernice married George Wilhelm; Sylvia Hofacker m Simon Miller; Ethel Hofacker m Edward Henninger; Bertha Hofacker m Charles Bristley; Opal Hofacker married Marley McGlothin; Vergie Hofacker m Bill Paff; Carl Hofacker m Susa Brown; Roy Hofacker m a Harshbarger Gale Hofacker m Clara Sheard; and Rolland Hofacker m Cordella Kiser. Wow, that’s your own reunion right there! Betty Sease talked about going to Uncle Willie’s as a child on Darke Preble County Line Road near Rt. 503. The huge barn would host over 100 people and the tradition of the Hofacker Reunion has continued since. I attended once and remember Rolland’s daughter going around with the laptop getting everyone’s names into the data base.

My husband’s family always held a Cain Reunion either here in Ohio or Indiana. Mostly the latter as most were from there. It was held every fall and the cousins would take turns hosting or finding a gathering place. I was sad once they decided to not do the tradition anymore I guess to no one wanting to get together or keep it organized. I feel families miss out on getting to know “their roots” and family.

In 2005 the Stewart’s hosted the Taylor Reunion at their farm. This was the first time it was held since the 1950’s. Over 100 attended from many different states across the country. It was a fun time of food, games, pictures and getting together. Sadly many of these cousins to each other are gone now.

Please help us identify people in the Baker and Hofacker photo. And share your reunion stories and photos with us. Let’s keep those reunion times going. It’s never too late to start one or get it started up again!