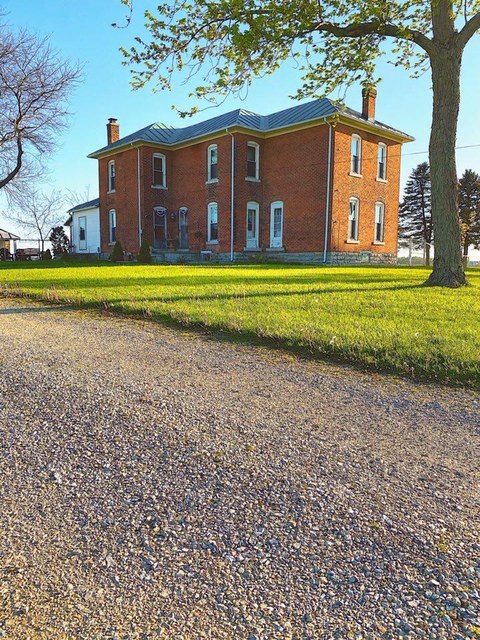 During the month of May AWTHS has been featuring old historic homes and farms and sharing their preservation stories and history of the landmarks that we know.

This photo of the Kuskie’s home is a two story brick home built according to Sarah and Anthony around 1840 and was thought that freed slaves were used to build the house and stayed on site. The home features brown stained woodwork with etchings and is quite a large house with two stair cases at one time. The property had a large bank barn at one time but had fallen into disarray and eventually came down. Now only some stone foundation remains. When the Kuskie family was erecting a fence the builder, Jim Clevenger of Eagle Fence helped with the history of the house and found out the builder was Douglas Marcum.

I remember the house from the 1960’s as my parents, Dale and Betty Sease owned it along with the farm. When my parents went their to farm I would get to run around with Pam Tegtmeyer who lived in the house and we had many adventures together. A train track for the Big Four went thru the middle of the farm and I remember the train as well as the man on the little cart going up and down the track checking it for repairs.

My parents had the original deed or title for the property so we know the past owners. It started with Joseph Richard 1835. It went thru several of the Fourman family who we found out were related to the Fourmans on Hollansburg Sampson Road. The farm has fluctuated from 160 acres to 77 acres thru the years.

According to the deed we find Jacob Fourman, son of Johannes and Catherine Fourman, bought the farm in 1852. Jacob was married two times according to Darryl Delk’s book about the Darke County Fourmans. First to Mary (Peter Fourman’s daughter who lived on Hollansburg-Sampson Road) and second to Susannah Root. We find this info in the deed as Susannah’s will is included in the document. It also listed all the children of both marriages: Samuel E. Fouirman, Lizze Fourman, Joshua and Sarah Fourman, Phoebe Netzley, Rachael Wetzel and Lee Baker. As well as grandson Raymond Besecker.

We also find that Jacob’s son, Samuel bought the farm and then in 1888 Jacob and Susanna bought back some of the aceage and Jacob died soon after and the farm was sold or went to Joshua Fourman.

In the Greenville Journal in 1890 we read of a Jacob Fourman, an old pioneer of Darke Co. living two miles east of here and who has been sick for a long time, died Thursday and was buried yesterday, July 14. We are not sure if this was same Jacob as the years of death do not line up with the deeds.

Another article dated 1894 mentions Jacob Fourman’s dwelling house, one and a half miles east, was burned one day last week. However, again we not certain it is this same house as Sarah has mentioned not seeing signs of fire in the old house anywhere in restoration work. Also there is a lot of the “Jacob” name so further research is needed to prove whether the same Jacob or same house as mentioned.

We admire the Kuskie’s for under taking a huge project of keeping up and preserving a huge old house such as this.

If anyone has old photos of this farm please share with Sarah and her family as well as AWTHS.

All credit is given to Annette Stewart for this article. If share, please include her name as the author as well as credit to the AWTHS blog site. Please see disclaimer and copyright info on AWTHS web site. Thank you.

Addendum: More to the old house preservation project: As a note I found that prior to the Kuskie’s purchasing this home that extensive work was done to the home. Readers probably remember the Littel’s living here for many years. My brother, Fred, farmed the ground and would talk to him. Interesting fellow. Anyways this house was in pretty bad shape-the bricks were crumbling, no heat system, old wiring and plumbing. Per past owner, the brick foundation was rebuilt, new windows put in, roof, electric and heating system. So THANK YOU to all who have helped restore and save this old house!