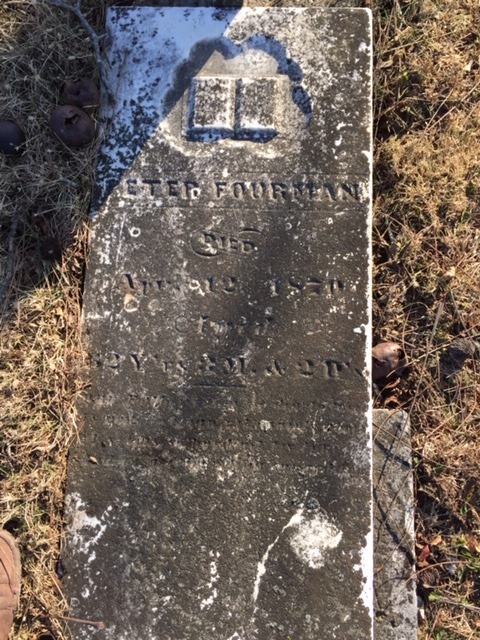 If these stones could talk: Written for cemetery tax levy and preservation of cemeteries.
In our family there’s a standing joke about poor old Peter Fourman. I was looking for his stone last year at Ithaca Cemetery and had my granddaughter with me. Well we couldn’t find him. Jade was so concerned about the stone and kept asking “where is Peter Fourman?”. Well, thanks to Jerry Snyder, Twin Twp. Trustee, Peter was found. In the back row by the fence since Peter is one of the “older” stones in the cemetery. He died in 1870. However, there are some stones much older having served in War of 1812 and Revolutionary War.
In studying census records we find his wife and children. For example, in the 1850 Twin Twp. Census Peter is listed as 43 years old along with wife Mary Ann and children Elizabeth, Mary, Susannah, Jesse and Catherine. We read about his stone being read by Anita Short in the 1960’s Cemetery Inscriptions as: Peter d. 4-12-1870; ae 62-3-2. Other family stones including his wife are listed.
In the plat map of 1857 for Twin Township, Peter’s land is listed on the corner of Albright Road and Hollansburg Sampson.
Darryl Delk has written a short note about Peter in his book about the Fourmans on page 73. He claimed Peter came to Ohio by 1840 and there was a lot of Fourman’s who settled around Gordon and Van Buren Township.
We cleaned Peter’s and his wife’s stones this summer. We found a buried stone along side and are planning to have these repaired and standing tall, hopefully next spring.